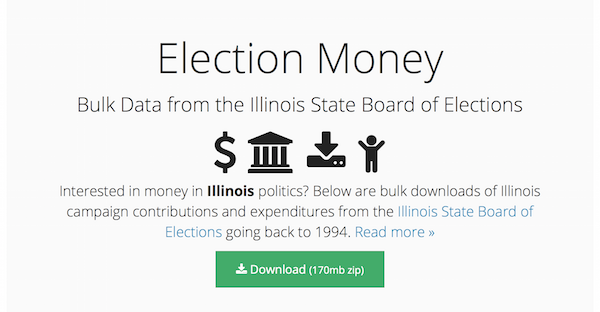 To empower journalists and citizens to investigate money in Illinois politics, we partnered with the Illinois Campaign for Political Reform to package up and document 20 years of campaign contributions and expenditures from the Illinois State Board of Elections.

With election season heating up (statewide on November 4, 2014, and in Chicago on February 24, 2015), knowing who’s spending money on political campaigns has never been more critical. In Illinois, this kind of data is challenging to get, especially in bulk. Until now.

DataMade and the Illinois Campaign for Political Reform (ICPR) teamed up to launch Election Money — bulk downloads of campaign finance data from the Illinois State Board of Elections.

Read more about the launch of Election Money.