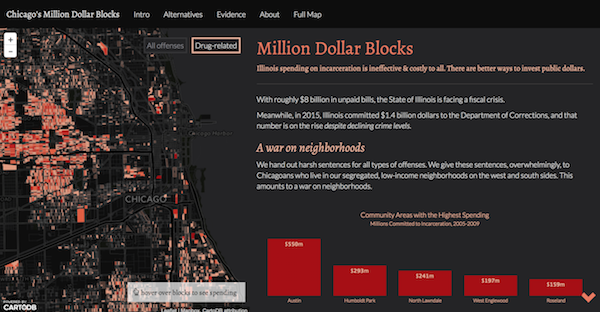 An interactive map showing spending on incarceration for every block in the City of Chicago.

For this pro-bono project we partnered with two criminal justice experts: Dr. Daniel Cooper, the Co-Executive Director of the Institute of Social Exclusion at Adler University, and Dr. Ryan Lugalia-Hollon, a Texas-based writer and strategist.

The map is based on data obtained by the Chicago Justice Project from the Cook County Circuit Court. It represents all adult convictions between the years of 2005-2009. For each conviction, we have data for what the offense was, the length of the sentence, and the offender’s residential address. From there, we calculate the cost to imprison each person based on their minimum sentence, and aggregate that by census block.

Browsing around the map you’ll notice that the neighborhoods on the south and west sides are disproportionately affected by the criminal justice system, especially when it comes to drug-related crimes. $290 million is being spent on non-violent drug offenders in one west side neighborhood alone, Austin.

This project draws from work by the Spatial Information Design Lab and Justice Mapping Center, who have, since coining the term “million dollar blocks,” helped re-frame the public debate around community justice in cities across the country. Seeing how effective this framing was, we decided to apply the concept to Chicago.

Million dollar blocks and the cost of incarceration
FlowingData | July 27, 2015

How Much Money Does Chicago Spend Annually To Incarcerate Its Citizens?
Meg Miller, Fast Company | July 23, 2015