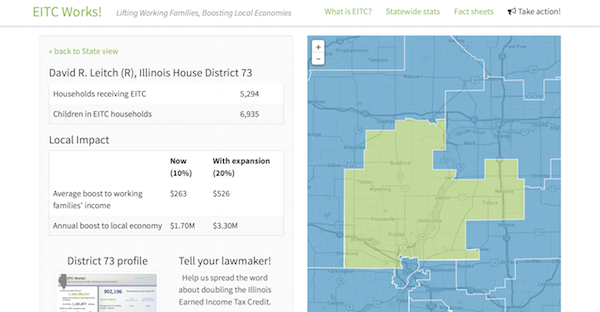 We showed how a proposed Earned Income Tax Credit increase would affect constituents in each state district.

With a vote coming up in the Illinois House on expanding the Earned Income Tax Credit, Voices for Illinois Children worked with us to show how the proposed legislation would affect constituents in each district.

DataMade worked closesly with Voices for Illinois Children over the course of one week to put together an interactive map detailing the effect of doubling the Earned Income Tax Credit (EITC) gain from 10% to 20% for each Illinois House District.

The site was featured in local media and Governor Quinn proposed the increase in his 2014 state budget recommendation.