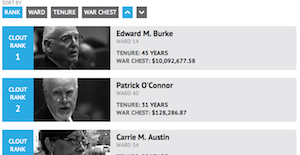 To quantify the power, or ‘clout’, in Chicago City Council, we partnered with the Chicago Sun-Times to model to rank the political influence for Chicago’s 50 Aldermen.

Exercising clout is an art more than a science, and perceptions of a politician’s power often matter as much as reality. But is there any way to try to measure an alderman’s clout?

Working together with Sun-Times reporters, DataMade was able to rank City Council clout by collecting data on: